Waiting outside the doors of Casino NB on a very cold and snowy Saturday night, I felt out of my comfort zone. As the doors opened and I cleared security and made it past the door-people to the ballroom (they did NOT ask to see my ID, by the way), I felt wayyyyy out of my comfort zone. There it was at the centre of the front of the room: the focus of the event and the subject of my little adventure in challenging one of my judgements (of which we all have several, amiright?) The Octagon.

I felt like a fish out of water in that ballroom in Moncton. As you all know, I’m a runner not a fighter, and here I was about to lose my mixed martial arts virginity.  I walked in there, took my seat, feeling awkward and shy, and even prepared for a little blood. The Elite1MMA “Bitter Rivals” event didn’t disappoint and I’ll admit that I left with a newfound perspective on the sport.

If you are a dedicated reader (thanks Mom) you’ll recall that I wrote about fighting last week in my discussion on judging other sports and athletes. While the gal in the full-length leopard print faux-fur coat and all of the TapOut shirts didn’t contradict any stereotypes about fight fans, after chatting with Cory “The Warrior” Vern on the morning of fight day and watching the bouts one-after-the-other, I am reformed. 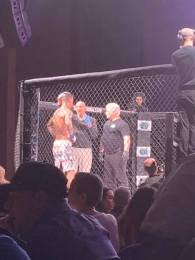 1. Not Every Fight Results in Bloodshed

The only time I saw blood (from where I was sitting anyway) was during the final of 8 fights.

2. Fighters Are Not All Beefcakes

I know I should be ashamed in thinking that one needs to be tall and muscle-bound to be a fighter, but then I stood next to Cory who is a bit shorter and weighs less than I do but had no issues dropping his opponent. Go figure, maybe there’s a future for me in MMA?

3. Fights Are Full of Ritual

I grew up Catholic and I felt like I was attending a sacred mass: there was carefully chosen entrance music and a processional through the room to a dais where the fighter was then de-frocked and blessed by the High Priest with the Holy Chrism of Mixed Martial Arts before ascending to the altar that is The Octagon. Silent prayers are offered up and it begins.

4. Not All Fighters Are Loud and Aggressive

Yes, I pictured fighters as loud and obnoxious meatheads, and while there was at least one fighter who matches that description at the event on Saturday, Alderic “The Coroner” Keith and Ryan “Weapon X” Goguen both graciously responded to my comments on social media and my friend, Cory, has to be one of the quietest and most gentle guys I know.

The match between Scott MacKinnon and Mike Somerville brought a smile to my face because they both had smiles on theirs. It was a great feeling to see two athletes truly enjoy their chosen sport and you could feel the camaraderie between them.

6. It Is a Rather Quiet Sport

I don’t know why I expected to hear lots of grunting and bone crunching but I anticipated lots of noise. Each match was almost serene in a way as there were lots of quiet and still moments: I imagined the fighters to be trash-talking telepathically instead of strategizing and contemplating their next moves.

The Main Event match was called a few seconds into the second round on medical advice as one of the fighters had a yucky gash on his right eyelid. The match was called in favour of the fighter whose name I won’t even mention because he doesn’t deserve it. He acted as if his strategy and strength won against his opponent and that wasn’t the case. After being declared the winner, he jumped on top of the cage and riled up the fans which I found distasteful. It would be like celebrating winning the marathon when you were the only one who ran it. In my opinion (and because this is my blog), the better athlete didn’t win the title but he showed the true spirit of the sport.

8. Fighters Aren’t That Different From Runners

I may not be able to drop someone to the ground but I learned that runners and fighters are more similar than we are different.

I don’t think you’ll see me in a TapOut shirt anytime soon and you won’t find me ringside at every fight that comes to town, but I definitely checked my judgments of mixed martial arts when I left the casino that night. There was beauty in what each fighter (well, almost each fighter) accomplished in the cage. The dedication to training and mental toughness required to engage in battle with an opponent, reminded me that sport is an expression of life,  (I know I’m getting philosophical on ya but it’s true.) We’ve all been called upon at some point to show our true character through strength and determination in a challenging situation.

Who knows, maybe you’re not so different from fighters, either.

I have been active in the fitness and wellness industry for almost 20 years and I've combined my love for event planning with my love of fitness! I help other businesses share their talents with the world through custom-built live events. I have Bachelor of Science Honours in Human Kinetics and Bachelor of Education degrees from the University of Ottawa and I have been a Personal Trainer Specialist with CanFitPro since 2005. View more posts